August 27, 2009
Oh I have had so much fun with this painting, though am unsure as to the title, something along the lines of 'Floral -Planters' or 'Floral - Patio', what do you think? It's not framed yet, is rendered on canvas board and started out as a figure study!

The figure wasn't coming together at all, so I rashly slathered black paint onto anaglypta and printed onto the surface and then glued a piece of the wallpaper on for good measure, as in the collages featured earlier in this blog.

Next came the green paint applied with a knife, which made me think of leaves, the leaves of Montbretia, so I mixed a lovely orange and tried creating flowers, again using a knife. Later I picked some Montbretia flowers and painted them (the two on the right hand side of the painting). Then, my daughter gave me some beautiful magenta coloured Gladioli and so they were incorporated too, it was such a pleasure to watch them open out from deep, red buds. 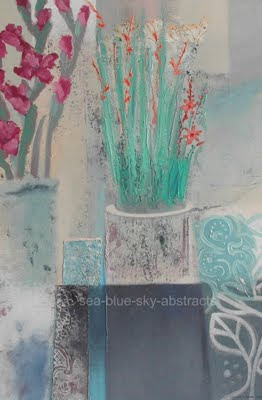 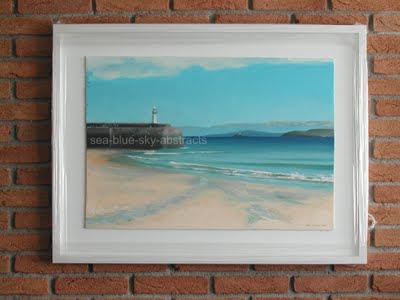 This painting took forever!! and is rendered on primed plywood - formerly part of an old wardrobe - in oils. I started off with a thin, diluted layer, there was no drawing involved, so it looked a mess for quite some time, adding subsequent thicker layers and creating definition, with transparent glazing as well. 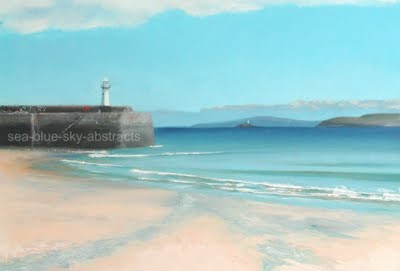 It is the commission mentioned quite some time ago, although the title is not really decided yet - 'Summer Bay' appeals but maybe 'St Ives Harbour & Godrevy' is more appropriate, because that's what the scene portrays.

'White Water on the Coast' and other small paintings....